“To promote physical and mental health and well-being, and to extend life expectancy for all, we must achieve universal health coverage and access to quality health care. No one must be left behind.” (SDG agenda for 2030)
Depending on the exact sources, global life expectancy currently lies at approximately 72 years although a global estimate tells very little about the differences between the countries. What applies to every country is the fact that women, on average, live longer than men.
The following cartogram looks at the absolute improvements of life expectancy between 1950 and 2015 and 2015 and 2050 by visualising how many extra years of life lived by their population through increases in life expectancy. 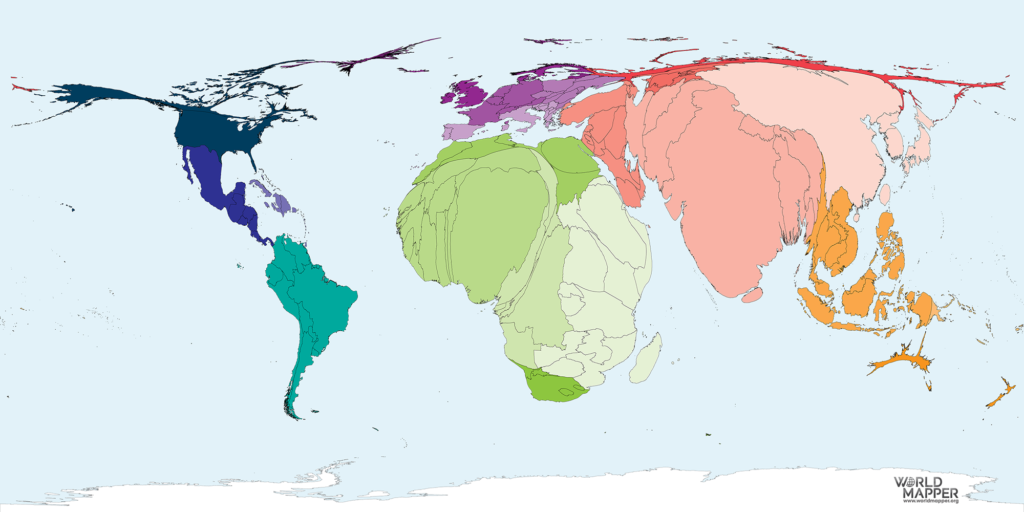 Although life expectancy has increased substantially in most countries over the past decades, this does not tell anything about the quality of life lived. Therefore international reports use different indicators to measure quality of health and well-being.
The Human Development Report for instance considers differences in access to physicians and hospital beds. Europe and Central Asia have 24.7 physicians per 10,000 people, South Asia 7.8 and Sub-Saharan Africa 1.9. The HDR also tries to measure ‘healthy life expectancy’, which would be the years lived to be expected to be in good health and ‘lost health expectancy’, which is the relative difference between life expectancy and healthy life expectancy expressed as the percentage of life expectancy at birth. According to the HDR “ Healthy life expectancy is 12.0 percent lower than overall life expectancy for all regions and human development groups. This means that, on average, people around the globe spend 88.0 percent of their life in fairly good health but face challenges in their last years. Disparities are large across countries and human development groups. Healthy life expectancy is 69.9 years in very high human development countries but 53.3 years in low human development countries.” (Human Development Report 2018)
While life expectancy remains a highly unequal issue, there are positive trends that give hope for longer lives for everyone. A tool published on the BBC website makes it possible to explore the life expectancy by country of birth and gender, showing how geography, gender and age all play a part in people’s longevity around the world.
Improving on this even further is one of the goals declared in the United Nations’ Sustainable Development Goals: “Ensuring healthy lives and promoting the well-being at all ages is essential to sustainable development.Significant strides have been made in increasing life expectancy and reducing some of the common killers associated with child and maternal mortality, but working towards achieving the target of less than 70 maternal deaths per 100,000 live births by 2030 would require improvements in skilled delivery care.”