Climate change is a challenge for the whole world. But national political interests have consistently curbed international efforts to reduce CO₂ emissions.
In what appears to be intensive and turbulent times in politics that the Bank of England’s governor Mark Carney has labelled as examples for recurring protectionism and ‘de-globalisation’ it appears an impossible political challenge to address global environmental issues such as climate change in a concerted transnational effort. Responses of the global geo- and biosphere to global warming are documented in an ever-growing number of studies that leave little doubt of the environmental impact and the influences that the modern industrial society has on climate variability. The need for immediate political action is widely accepted and before the USA’s withdrawal from the 2015 Accord de Paris (Paris Agreement) could be seen as a global political consensus on the issue, even if disagreements on the best solutions have always existed.
Disagreements circle around the question of how to reduce CO₂ emissions as a major contributor to the underlying environmental problems. Strategies of mitigation as well as adaptation to the negative consequences of climate change are eventually a task for national politics. Since climate change itself is a global phenomenon, mere national interventions are not sufficient in tackling the effects of climate change. At global summits these different strategies are negotiated, since major contributors and those countries most vulnerable follow very different national interests. 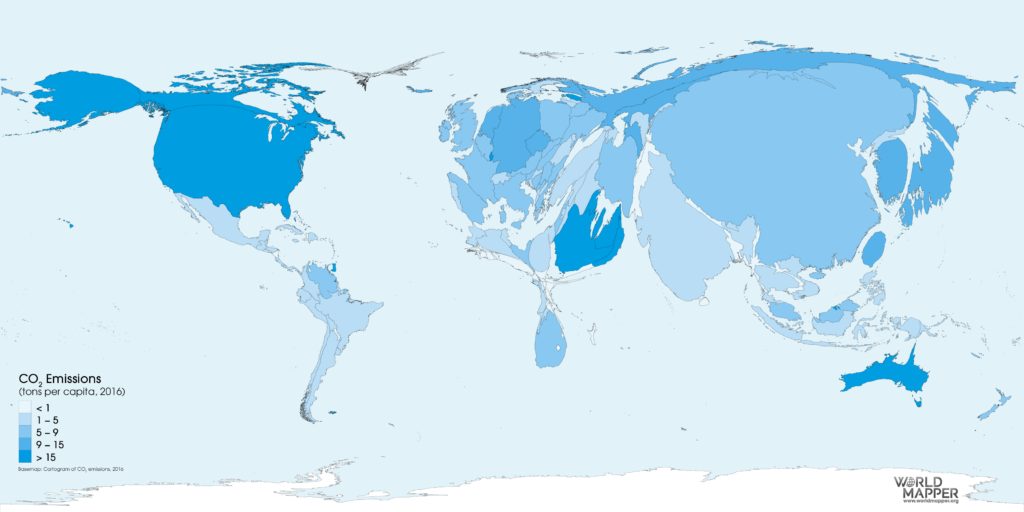 A map of the global CO₂ emissions in 2016 provides an insight into the side of the ‘culprits’, who themselves can be viewed from different angles. The data shown in the first cartogram displays each country of the world resized by their total fossil CO₂ emissions (excluding effects of deforestation which accounts for 11 per cent of these emissions). Overlaid are the relative emissions in tons per capita in that year. By absolute quantity, China is the largest contributor, followed by the USA and India. The three countries account for approximately half the quantity of emissions in this dataset. At the same time these three countries differ significantly in their relative contribution: The USA is with 15.56 tons CO₂ per capita among the worst contributors, while China has approximately half (7.45) and India a fraction of that (1.92). These relative contributions are used as negotiating positions that emerging (as well as developing) countries need to increase emissions in order to achieve economic success.
Such patterns can be observed around the world, so that the maintaining or even increasing economic output – usually with increased emissions as a trade-off – lies in the national interest of many countries. For concerted action towards tackling climate change, the largest contributors would obviously have the biggest impact in reducing their emissions.
The political commitment to such changes has always been at the centre of global conventions on climate change that are adopted in the United Nations Framework Convention on Climate Change. The 1997 Kyoto Protocol was the first serious effort to not only acknowledging a role of humans in global warming, but to also implement measures to reducing this impact. 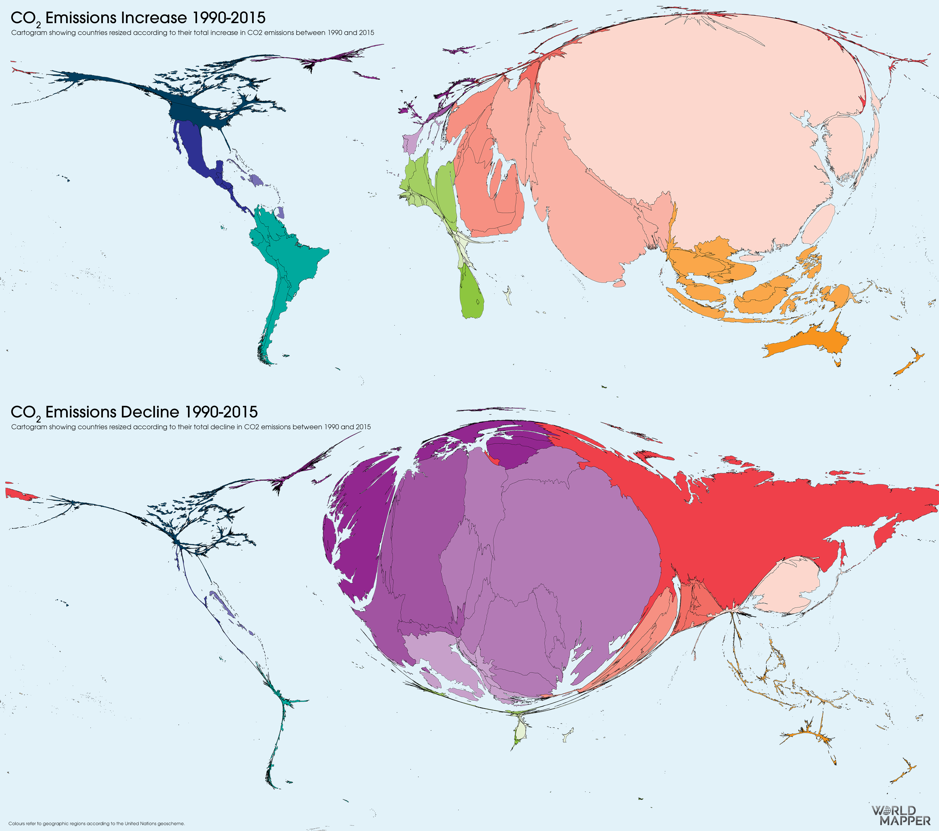 Nevertheless, ever since the agreement was signed, CO₂ emissions have been steadily rising, largely fuelled by considerable global economic growth. The second pair of cartograms show how individual countries have been contributing to these increases, and to a much smaller extent which countries managed a relative decline in that period.
The largest absolute CO2 emission increases between 1990 and 2015 came from emerging economies, most notably China, and to a smaller extent India, amongst other countries. Other regions, especially Eastern Europe, Central Asia, and Russia, have seen declines in the same period.
However, rather than these declines being due to radical political intervention or commitments of these countries, many of these changes can be attributed to rather indirect political changes. The fall of the iron curtain and a process of deindustrialisation of the most polluting industries there, therefore the results of a political and an economic transition.
What the data shown in these visualisations demonstrates is the lack of serious political will or incapability of the global community to genuine address human-made climate change at the level of international agreements. As this longer-term perspective demonstrates, this is not a phenomenon of recent years, rather than has been endemic ever since the Kyoto protocol. National economic interests have always undermined the small attempts of finding a joint global strategy. The more recent dominance of populist politics in those countries that are also major contributors to this problem will most likely make the quest for solutions through international agreements even more difficult. Whether this means that strategies for mitigating and containing the effects of anthropogenic climate change will become obsolete is still an unanswered question. But new solutions for adaptation to the new realities of a changed global climate seems inevitable at significant economic costs – which could become the price for a lack of global political leadership.

View more details about these maps in the Worldmapper map library: