Cartographic Views of the 2020 US Presidential Election

The 2020 US presidential election did not only see a competition of two political opponents. It also was a competition of the media for catching the attention of larger audiences. Some of the most prominent news organizations excelled in their visualization capabilities compared to previous elections, with cartographic representations often being a central part of this effort.
Never had there been such a large diversity of – often interactive – mappings while the results came in. The long wait for confirmed (or at least relatively certain) outcomes from the different states helped to put these visualizations in the spotlight. As the wait went on, the different types of visual representations themselves also became part of discussions, especially in social media. This helped making wider audiences aware of the caveats that conventional mapping methods have in visualizing election outcomes.
In the context of US elections, it was the incumbent president himself who demonstrated such a lack of map reading skills in the aftermath of the 2016 election. After his election victory he distributed conventional maps of the results to journalists in order to demonstrate his presumable landslide win across the country.
Conventional mapping techniques show data from a geographical perspective. For election outcomes this means that they show vote shares plotted onto the distribution of land area. This usually leads to sparsely populated rural areas being over-represented. In contrast, dense urban areas with an often significantly different demographic are obstructed from these maps, therefore providing misleading representations of an election outcome.
A different way of showing elections is the use of so-called cartograms where areas are transformed by certain (often social) indicators. The most commonly used cartograms usually show a proportional representation of population distributions. This can be achieved in manifold ways, as the wide range of visualisations during this election demonstrated. 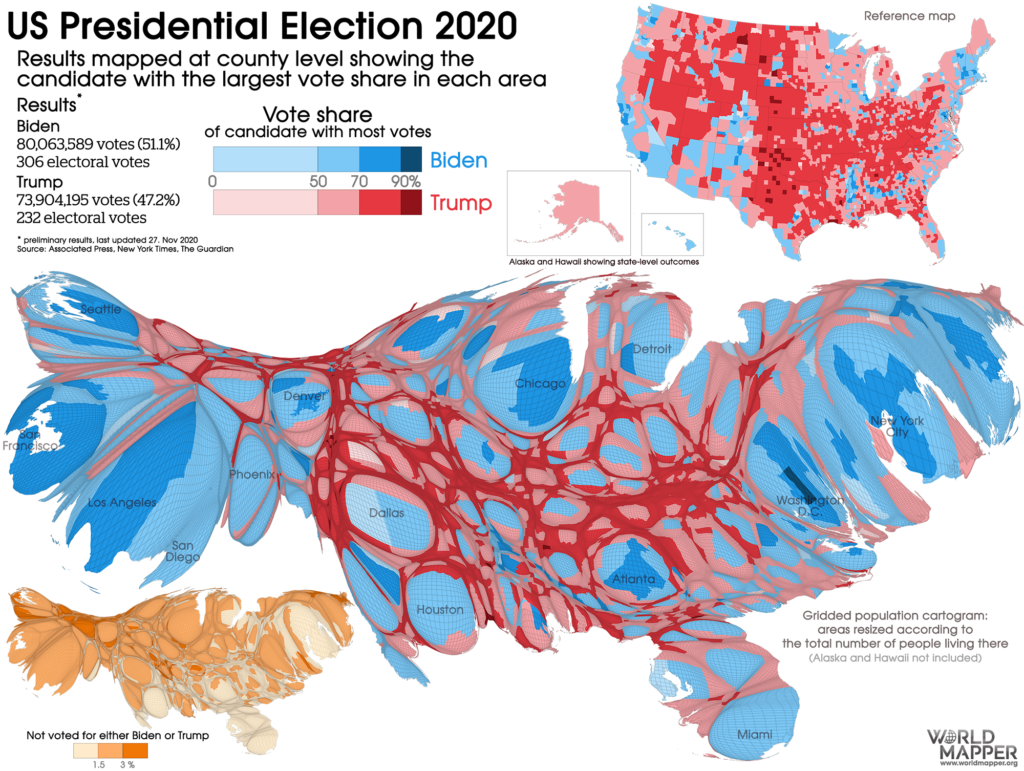 US Presidential Election 2020, Results By County

The comparison of the electoral outcome in a normal map and an equal-population projection shows, how Biden’s vote dominates the spatial distribution of the votes in the most densely populated areas that stand out in the cartogram. Almost all large urban centres, including quite a few in the mid-west, show a majority of votes for Biden. Trump’s vote share was highest in the rural areas, while his former strong showing in some urban areas and especially suburban belts around the cities that he could win over in the 2016 election largely vanished.
However, while the county-level picture shows the most detailed picture of the political landscapes of the country, the actual results that matter for the outcome are those at state-level (which also led to Hillary Clinton losing the 2016 election despite having won the popular vote at the time). The following map series shows three different cartographic perspectives of the election outcome at state level: Shown here are one conventional map and two variations of cartogram depictions that demonstrate how the change in perspective provides unique new insights. The different visualizations show how using different base-maps can result in changing narratives for election outcomes. At the time of writing (Nov 16, 2020) no final results were fully declared, although most states had completed counting between 95 and 100 per cent of the votes. Therefore only minor changes in this overall picture provided here are to be expected (putting possible legal challenges to these outcomes aside). 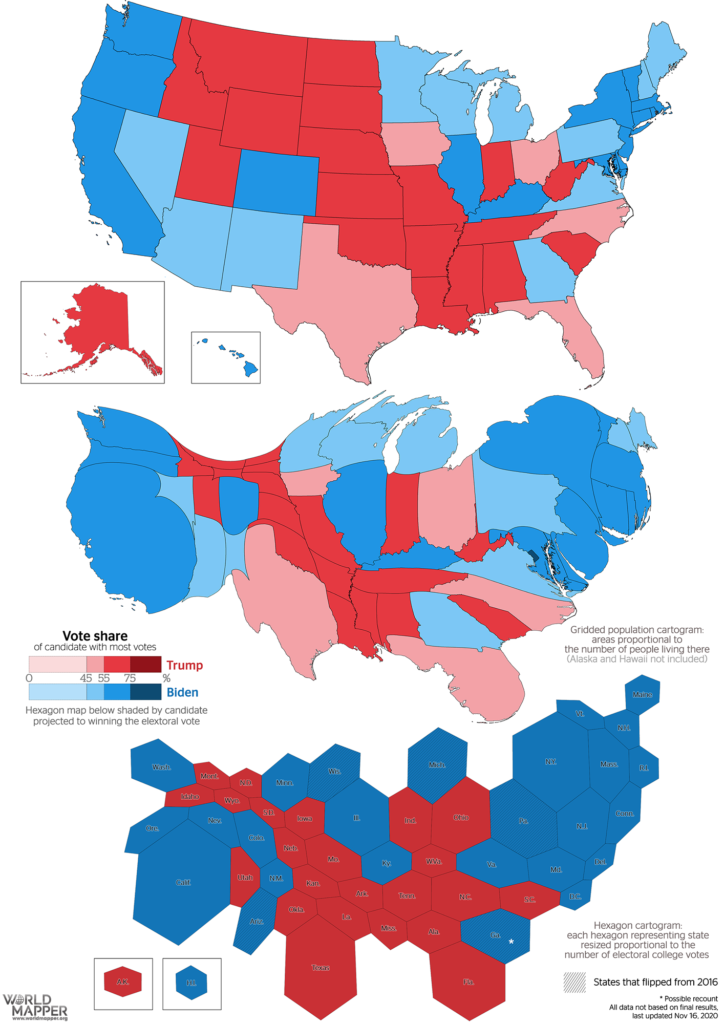 US Presidential Election 202, Results by state

The upper two maps both use a gradual color scheme to highlight the different vote shares of the candidate with the respective highest vote share in a state (therefore being on track to winning all the state’s votes in the Electoral College). In the conventional map projection (top) this does resemble a significant dominance of the votes for the Republican Party and Donald Trump as the incumbent president across large parts of the country. Yet changing the base-map to a population-weighted cartogram (middle) where each state is proportional to the number of people who live there, this impression becomes relativized. The dominance of the Democratic Party with their candidate Joe Biden in some of the most populous states becomes apparent, while the Republican vote in the mid-western and central parts looks much less prevailing due to the respective small populations there.
The display of the vote shares also shows how politically divided the USA have become: in around 16 states the vote share of the winning candidate lies in the range of between 45 and 55 per cent, showing how relatively close the outcome has been. When the final results have been released, this pattern will become even more visible at larger scales. This will only be the start of trying to understand the full spatial patterns that defined this highly unusual presidential election. A geographical analysis will be a crucial part of identifying some of the underlying causes for such a polarized country. It will be crucial for the forthcoming presidency to understand these patterns when it comes to finding solutions to mending a highly divided society.
The final map (bottom) is the most accurate picture of the actual political outcome of the election. Here each hexagon represents a federal state. This was then resized according to the total number of votes that this state has in the Electoral College, the assembly which elects the next president. While the legal battle over the election outcome might continue for a while and could change some of the political landscapes drawn in these maps, it seems unlikely that this map is going to change significantly. What it shows is that the majority of electors in the Electoral College are mandated to vote for Joe Biden to become the 46th president of the United States of America.

This feature is a modified version of a a contribution for the US Election Analysis 2020 published by the Centre for the Study of Journalism, Culture and Community in collaboration with Political Studies Association. The report including the full analysis that these maps were taken from is published online at www.electionanalysis.ws/us.

The county-level results map can also be viewed in the maps section where you find further details about the cartograms, the data and their sources, and also the possibility to obtain map use licenses for commercial use: