Which are the world’s happiest countries?
Bhutan is credited as the first country to have implemented the concept of “Gross National Happiness” as an official measure for the state of a nation, introduced by the king in 1972. And after the financial crash in 2008, ideas about giving the “spiritual, physical, social and environmental health of [people] and natural environment” more prominence over mere economic development are reflected more and more in international efforts towards a sustainable future.
The Happy Planet Index (HPI), developed by the New Economics Foundation, takes a rather radical approach on this issue. It aims to measure well-being and happiness by taking a universal and long-term approach to understanding, how efficiently people in a country are using the environmental resources to live long and happy lives. 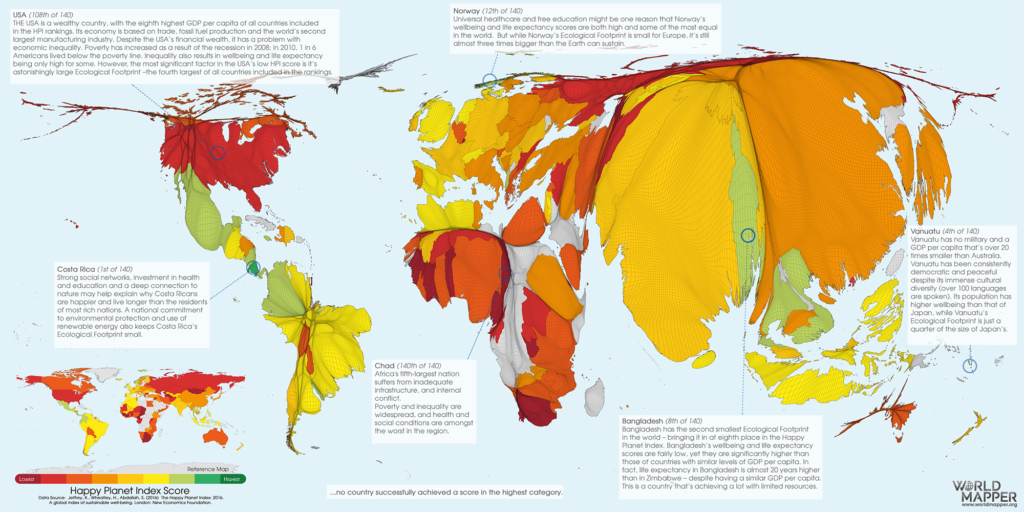 This map shows the results of the most recent Happy Planet Index 2016 report from the perspective of people. The gridded population cartogram, showing world resized according to the number of people living in each area, combined with the national HPI score.
The indicators that are used for calculating the HPI score cover life-satisfaction, life expectancy, inequality of outcomes and the ecological footprint. As argued in the report, “GDP growth on its own does not mean a better life for everyone, particularly in countries that are already wealthy. It does not reflect inequalities in material conditions between people in a country.” This explains, why consumption patterns are seen as more important for well-being than production. It also acknowledges that inequalities in well-being and life expectancy are important factors in the overall happiness of the population in a country.
When taking these notions into account, the rich industrialised countries score much worse in achieving sustainable well-being for all. Of the 140 countries included in the HPI, Luxembourg is the most extreme example for a wealthy nation scoring very badly: The country does well on life expectancy and well-being, and also has low inequality, but sustains this lifestyle with the largest ecological footprint per capita of any country in the world. It would require more than nine planets to sustain this way of life if every person on Earth would live the same way, showing that the standard of living comes at a high cost to the environment.
Amongst the positive stories is Costa Rica, which is also highlighted in the map. The country has persistently scored highest in all HPI releases (the 2016 edition is the third, after 2009 and 2012). More of a surprise might be the high score for Mexico (2nd), which is credited to massive efforts into improving health and environmental sustainability. Despite challenges with tackling inequality, well-being is perceived higher than in the wealthier northern neighbour, the United States. Quite a few Central and South American nations, as well as some Asian and Pacific countries do better than many wealthy nations. However, the African continent shows that at the bottom end extreme poverty can be a limiting factor in achieving sustainable well-being.
This change in perspective explains why in the public perception of wealthier societies the world has stopped from becoming an ever better place. The indicators used in the Happy Planet Index acknowledge some of the most pressing global issues in recent years, such as unstable economic developments, rising inequalities, and environmental change. These have become an important element in the well-being of societies. As a consequence, other parts of the world are doing remarkably better in the combination of these indicators. This might lead to the conclusion that there are valuable lessons to be learned from the best scoring countries about how to better achieve sustainable well-being for everyone on this planet, regardless of or beyond the aim for material wealth.

A modified version of this map was published in the January 2017 edition of Geographical Magazine. Please contact us for further details on the terms of use.